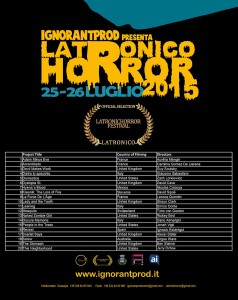 We are pleased to announce “Lady and the tooth” has won the prize for Best screenplay at Latronic Horror Film Festival in Italy!  Thanks to the Latronic team, the jury and the audience. Lady and the tooth was made possible through the support and talented crew of Melvyn Ternan – Voice Artist, Sound Designer – Alison Bown, Composer – Chris White, Producer – Kim Noce, Editor – Benjamin Gerstein, Additional Sound – Mary Milton and Happy Hour Productions.

The festival, sponsored by Lucana Film Commission and the town of Latronico (PZ), animated and scared the city centre from 24th to 26th.

The rich program alternates the screening of movies in competition and special sections about horror thanks to the reliable participation of Federico Frusciante, successful youtuber and president of the jury, and Luca Ruocco, screenplayer, actor and director, promoter of the web site “InGenereCinema” and selector of Rome’s Fantafestival.
Some directors that took part in the competition attended the event: Enrico Conte (Leaning), Dario Almerighi (Oscure Memorie) and Jonah Vigil (People in the Trees), the last one directly from Seattle, to highlight the international feature of the show.