Kim Noce is one of this year’s three (all women!) WITHTEETH commissionees, a new moving image commissioning fund conceived by LSFF and supported by @aceagrams. For the next two days, she’s taking over LSFF Instagram and WITHTEETH Twitter  to give an insight into the creative process behind ‘Your Mothers Are Mine,’ an animated ode for mothers ‘choosing to be possessed by love’, conceived, created and completed in less than thirty working days. 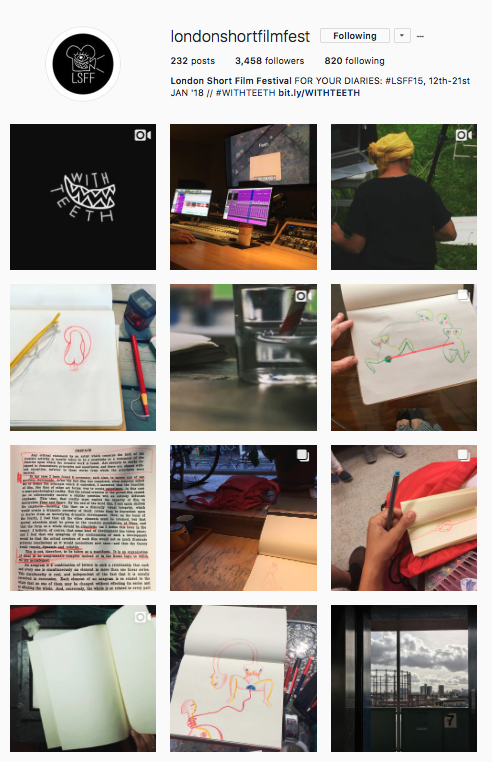 “The only time we truly and physically possess and are possessed by someone, are within those nine months we live within our mother. Enveloping and enveloped. Contained and containing. Owned and loved. Although we are physically separated at birth that bond plays off throughout all of our life. We repeat it, deny it, confront it, hide it, ignore it and play it off from the womb to the grave in all our relationships.

With Your Mothers Are Mine, I want to embody the beauty, quirk, and conflict of the connection between mothers and children from birth to death, exploring when, how and if the umbilical cord is ever cut.”

“I think in images, not in words, so I draw. All my shots are animated in this way – drawn in a notebook, “blindly” without recording or checking movement.

The animation is done on location without a camera or onion skin. The shapes are not maintained, the movement is not planned but it is straight ahead, the mistake are part of the final result, the style changes.

It is rather crippling to animate this way as there is not a safety net, and it shows all the flaws, the mistakes. I am happily regretting it, but I really wanted to try…to fail.”

“I moved to London because it was the city where my mother grew up. The alternative was Paris, the city of Art. I started writing my own diary in cafes and bars, like my mother did when she arrived in Italy. Instead of rebelling against her – since she was no longer present –

London held the promise of freedom from the shackle of religion, race, ethnicity, gender, stereotypical cultural value and my identity … or at least this how it appeared to me then in the cultural melting pot of an unknown city and language.

I started writing my own diary in cafes and bars, like my mother did when she arrived in Italy. Instead of rebelling against her, – since she was no longer present – I dutifully sought to follow some of her steps, with a mixed love and vengeance.

Like a diary the animation is based on a loose emotion scribbled out into the page hurriedly without worrying about the exact “grammar” and “spelling”. Or I am supposed not to worry, to be free to be spontaneous… that’s was the idea of the project.”

“Taken from ‘An anagram of ideas on art, form and film’ by Maya Deren” 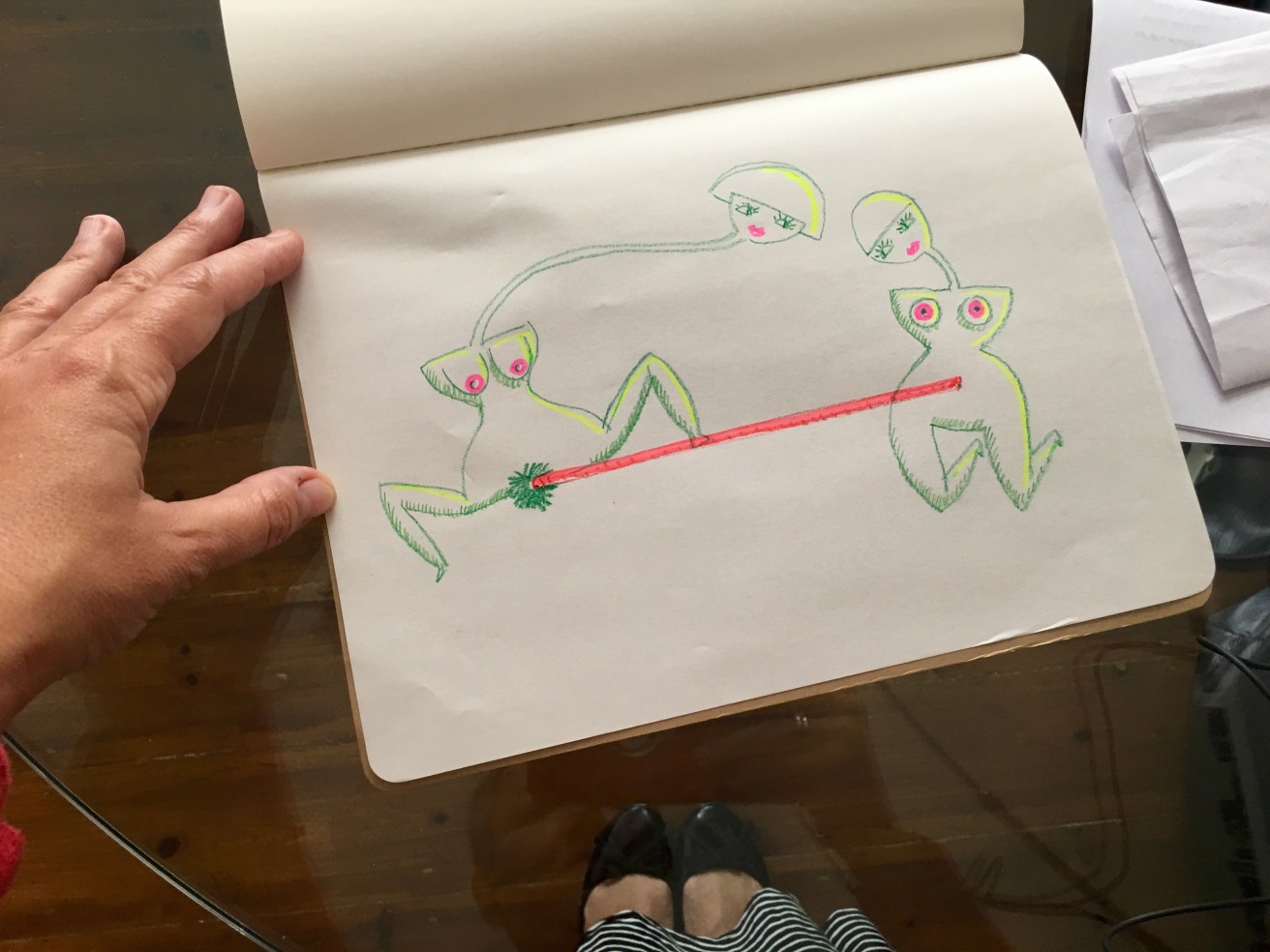 “‘For my father, the man who become my mother.’

My father was my actual mother, he took over her role. He was even fiercely jealous of our step mother. I will dedicate this film to him.

When you are “of age” and your menstruation starts you are to be explained why. My father – zealously taking over the role of my departed mother – went straight to the point of what menstruation is without any subterfuge, with Encyclopaedia at hand for pictures and proof; to conclude the conversation with the need of use of condoms. At 11 years old the latter was a tad too early.

So, body still acerb, you are already confronted with your own

potential motherhood. Teens and early twenties are filled with precaution to avoid pregnancy at all cost. Late twenties grandmothers ask for potential husbands, thirties have father fretting to settle in the idea of being grandparents one day – soon please?- , forties it is the clock ticking that send frantically friends to clinics. And then it will be menopause. From the age of your first menstruation till the end of menopause you are monthly reminded of motherhood, of life, of choices, of love, of death. Even just for a second, a fleeting thought; but every month!

Since I started fine art I always stated the greatest art work is to bring a child to life. We strive to bring life in our creations and the perfection is found within a mother (and a father). I don’t know what it felt like in the past, if all women wanted children. I personally doubt it; but socio/political/cultural pressure can distort one self perception if they collide. So I imagine most women wanted children.

I -almost- knew I would never have children, and I did not. I am making a film about motherhood and I don’t know anything about it. Of course ” it is the mother and offspring relationship” I am exploring, but still I have not lived the other side of the coin and I will never do. Nothing, I know nothing. Nothing at all. I did regret applying to the scheme with such undeveloped idea, but it was too late since I end up being selected.

I calm myself by thinking that after all for centuries western artists tried to represent the unknown: hell, heaven, gods, emotions, unconscious etc etc! I calm myself reading William Kentridge “Six Drawing Lessons : in praise of Mistranslations”. And I am eating a lot of chocolate too.

Kentridge writes: ” … let us consider Durer ‘s rhinoceros, made in 1515. As I have understood, a rhinoceros was sent to the King of Portugal, and from to Pope Leo X. While on the journey from Portugal to Italy, the ship carrying the rhinoceros was lost in a storm. The ship and the rhinoceros in its cage in the hold sank to the bolton of the sea off the cost of Italy. As a forensic record of the gift, Durer was asked to make an image of the drowned animal. Having no model in front of him, he was reduced to making an identikit image based on reports from others who had seen the rhinoceros, or who had spoken to someone who had reportedly seen the creature. Sownehere behind the image there was the animal. But the image is overloaded with all the projection of Durer’s interlocutors, of Durer’s conjectures, and the history of woodblock chapbooks of imagine creature, griffin and sphinxes. Durer makes a wood cut rather than an engraving. The crude medium both convening gaps in the knowledge and trying to convince, rather than to describe or report. The animal oscillates between being of this world, and animal observed, and coming from a completely different universe, being made more and more impossible. being familiar and becoming other.

This is what I take with me while I eat the remaining chocolate bar:

“Animating on location in my studios in London and Watford, captured and edited by my Producer, Shaun Clark. The process can be sometimes so slow and repetitive that it feels more like walking, than drawing. You have set the destination, you know the path and you start to walk at a good pace. Then you go on an automatic pilot, step after step, and your mind start to wonder from daily chores to deep forgotten memories, until you trip over a mistake because you lost concentration”

“I am officially “a tiny bit blind”: this drawing is for me very soft focus, without texture when I animate. Shaun bought me a pair plastic glasses for £1.00. In the last film half of the shots are out of focus as I did not know my sight was failing me … I blamed the lenses and the sharpener! But I actually removed the glasses as the textures distracts me from the movement, so technically what I see it is not what I am actually drawing.” 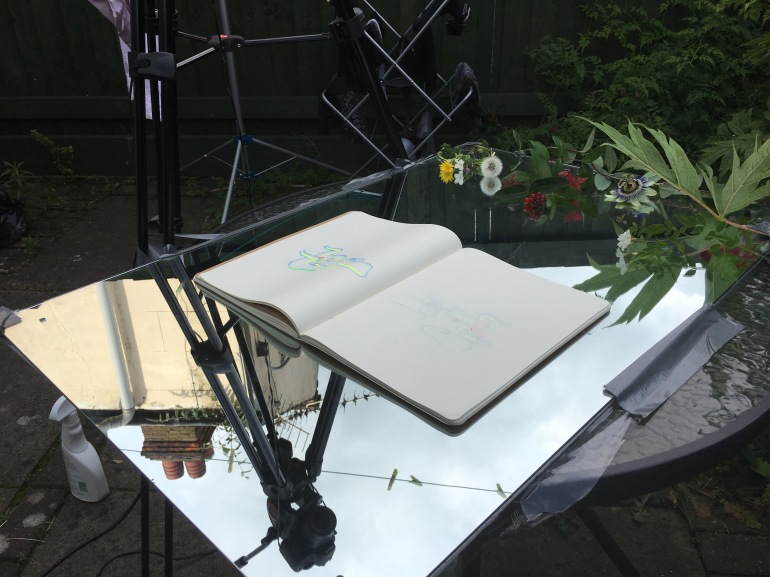 “After colouring in 20+ notebooks, shoot day arrives. The British weather proves problematic but I decide to embrace the imperfection of a more fluid working method, allowing space for playful experimentation and plenty of mistakes without the constraint of what the commercial world often requires. Or is spontaneous the kinder word for amateurish? Frankly my inner critics hates me even more when I write, so I rarely get an answer.”

Finally we managed to do the 5.1 Mix at Fonic!

We are happily bouncing tracks all over the room, with Marty O’Brain (Mix) , Hutch Demouilpied (Composer) and Shaun Clark (Producer)!

I jumped around the room pointing which speaker I wanted and demonstrating physically   “where the music should go” running from one side of the studio to the other (since I can’t distinguish right from left); all much to Marty amusement …

I enjoyed it way too much! And they had been even so kind compliment on my “drawn notes” for the sound, like you would do with lovingly child. They are wonderfully professional and so talented!